This new paper reveals how the FDA determined the allowable amount of aluminum in a single vaccine–the same amount for a 7lb newborn as a 160lb adult–and reveals that it is absolutely critical for everyone who administers vaccines to children to cease following the CDC’s pediatric schedule and begin considering what is best for their young patients. 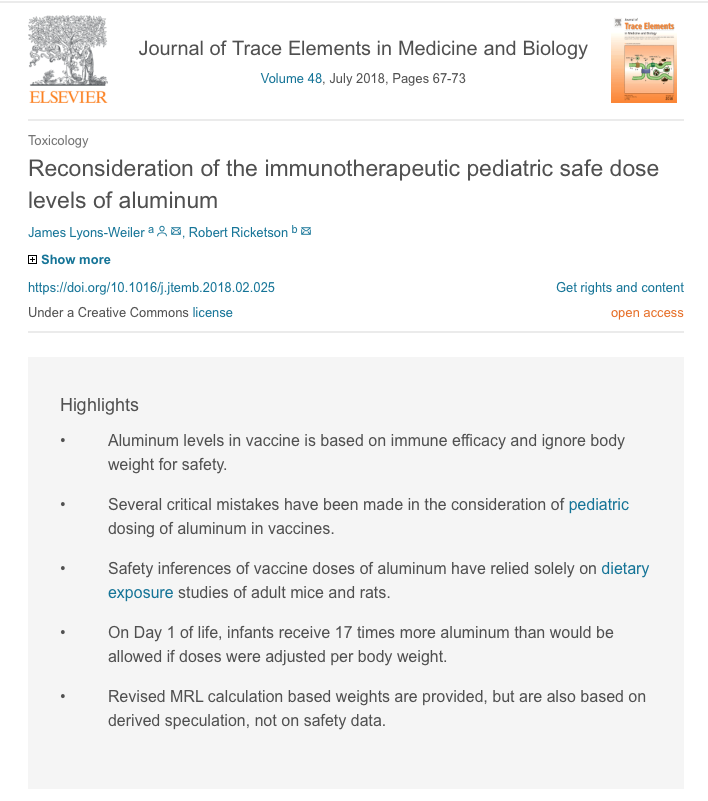 For an explanation of how the aluminum adjuvants in vaccines can lead to autism, see this article: 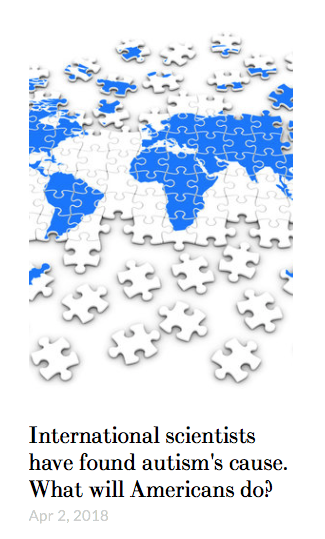 What is an adjuvant?

From the CDC: “An adjuvant is an ingredient of a vaccine that helps create a stronger immune response in the patient’s body.  In other words, adjuvants help vaccines work better. Some vaccines made from weakened or dead germs contain naturally occurring adjuvants and help the body produce a strong protective immune response. However, most vaccines developed today include just small components of germs, such as their proteins, rather than the entire virus or bacteria. These vaccines often must be made with adjuvants to ensure the body produces an immune response strong enough to protect the patient from the germ he or she is being vaccinated against.” 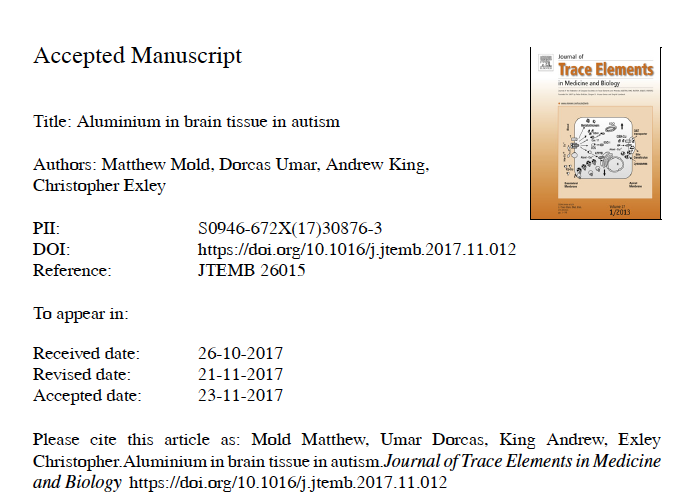 “The Dwoskins had attended the Institute of Medicine (IOM) and FDA meetings on vaccines, where aluminum was briefly discussed. Both the IOM and FDA acknowledged that aluminum adjuvant toxicity had not been studied. Inferences had been made, based on single-vaccine studies, but experiments to measure the toxicity of aluminum adjuvant had never been done (except by Shaw). In particular, nobody had ever tested the effect of the total amount of aluminum adjuvant received from the vaccine schedule recommended by the CDC.”

Dr. Suzanne Humphries breaks down the issue of aluminum into fine detail to help you better understand its use and effects. 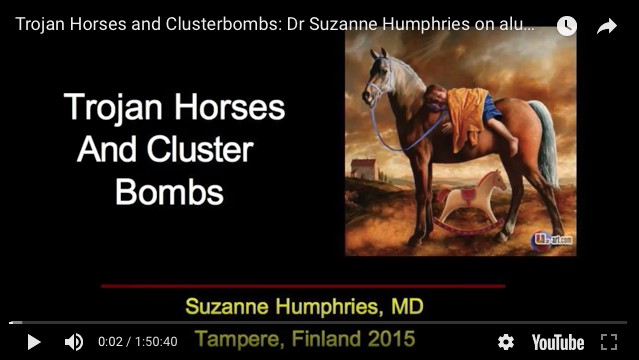 Here she explains the different forms of aluminum adjuvants and how mislabeling has played a role in obfuscating the common ingredient of several vaccines that continues to cause injuries. 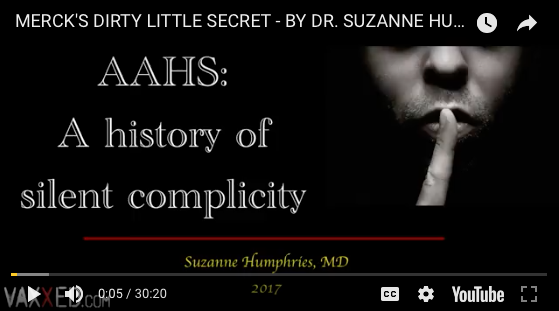 “Aluminum is an experimentally demonstrated neurotoxin and the most commonly used vaccine adjuvant. Despite almost 90 years of widespread use of aluminum adjuvants, medical science’s understanding about their mechanisms of action is still remarkably poor. There is also a concerning scarcity of data on toxicology and pharmacokinetics of these compounds. In spite of this, the notion that aluminum in vaccines is safe appears to be widely accepted. Experimental research, however, clearly shows that aluminum adjuvants have a potential to induce serious immunological disorders in humans. In particular, aluminum in adjuvant form carries a risk for autoimmunity, long-term brain inflammation and associated neurological complications and may thus have profound and widespread adverse health consequences. In our opinion, the possibility that vaccine benefits may have been overrated and the risk of potential adverse effects underestimated, has not been rigorously evaluated in the medical and scientific community.”

Pregnant women are being told that they are being given vaccines to protect the baby in language that implies, if not outright states, that appropriate safety studies have been done. They have not. Pregnant women in the general population are in essence being used in ongoing clinical trials without their fully informed consent.

Over the years, data has been gathered in a haphazard fashion using voluntary registries set up by pharmaceutical companies and in adverse event reports to VAERS, both of which suffer from extreme under-reporting. VSD (Vaccine Safety Datalink) studies on the safety of vaccination during pregnancy mostly include only pregnancies with live-birth outcomes, and very few studies look at the long-term health effects on children. One such rare study on vaccination with the influenza vaccine during pregnancy (Zerbo et al) found a significant association with autism. Even the most elaborate and inappropriate application of adjustments and corrections could not make the association go away in the first trimester, so the authors simply dismissed the result as due to chance. This is not science. http://jamanetwork.com/journals/jamapediatrics/article-abstract/2617988

The impact of maternal immune activation during pregnancy, and the impact of exposure to various vaccine components, such as the placenta-crossing 250 mcg of aluminum in the Tdap, on long-term neurological development are not known, but there’s enough science indicating that extreme caution is warranted. The current push to vaccinate during every single pregnancy, as well as during every outbreak, comes without any understanding of the health effect of such frequent administration of three disease antigens (tetanus, diphtheria, pertussis) and other vaccine components. This is a small sampling of studies on one component, aluminum:

2002 “The potential role of aluminium in Alzheimer’s disease.”

2004 “Neurotoxic effects of aluminium among foundry workers and Alzheimer’s disease.)

2007 “Mechanisms of aluminum-induced neurodegeneration in animals: Implications for Alzheimer’s disease.”

2008 “Role of metal ions in the abeta oligomerization in Alzheimer’s disease and in other neurological disorders.”

2011 “Aluminum vaccine adjuvants: are they safe?”

2014 “Are there negative CNS impacts of aluminum adjuvants used in vaccines and immunotherapy?”

2014 “A sudden onset of a pseudo-neurological syndrome after HPV-16/18 AS04-adjuvated vaccine: might it be an autoimmune/inflammatory syndrome induced by adjuvants (ASIA) presenting as a somatoform disorder?”

2014 “Prolonged exposure to low levels of aluminum leads to changes associated with brain aging and neurodegeneration.”

2014 “Oxidative stress and mitochondrial dysfunction in aluminium neurotoxicity and its amelioration: a review “

2014 “Aluminum in the central nervous system (CNS): toxicity in humans and animals, vaccine adjuvants, and autoimmunity.”

2015 “Correlation of aluminum and manganese concentration in scalp hair samples of patients having neurological disorders.”

2015: “Biopersistence and brain translocation of aluminum adjuvants of vaccines”

“We previously showed that poorly biodegradable aluminum-coated particles injected into muscle are promptly phagocytosed in muscle and the draining lymph nodes, and can disseminate within phagocytic cells throughout the body and slowly accumulate in brain. This strongly suggests that long-term adjuvant biopersistence within phagocytic cells is a prerequisite for slow brain translocation and delayed neurotoxicity.”

2016: “Insight into the cellular fate and toxicity of aluminum adjuvants used in clinically approved human vaccinations”

“We demonstrate that not all aluminium adjuvants are equal neither in terms of their physical properties nor their biological reactivity and potential toxicities both at the injection site and beyond. High loading of aluminium oxyhydroxide in the cytoplasm of THP-1 cells without immediate cytotoxicity might predispose this form of aluminium adjuvant to its subsequent transport throughout the body including access to the brain.”

“Vaccine adjuvants and vaccines may induce autoimmune and inflammatory manifestations in susceptible individuals. To date most human vaccine trials utilize aluminum (Al) adjuvants as placebos despite much evidence showing that Al in vaccine-relevant exposures can be toxic to humans and animals. We sought to evaluate the effects of Al adjuvant and the HPV vaccine Gardasil versus the true placebo on behavioral and inflammatory parameters in female mice.”

“Although generally well tolerated on the short term, it has been suspected to occasionally cause delayed neurologic problems in susceptible individuals. In particular, the long-term persistence of aluminic granuloma also termed macrophagic myofasciitis is associated with chronic arthromyalgias and fatigue and cognitive dysfunction. Safety concerns largely depend on the long biopersistence time inherent to this adjuvant, which may be related to its quick withdrawal from the interstitial fluid by avid cellular uptake; and the capacity of adjuvant particles to migrate and slowly accumulate in lymphoid organs and the brain, a phenomenon documented in animal models and resulting from MCP1/CCL2-dependant translocation of adjuvant-loaded monocyte-lineage cells (Trojan horse phenomenon). These novel insights strongly suggest that serious re-evaluation of long-term aluminum adjuvant phamacokinetics and safety should be carried out.”

2017 Effects of Aluminium on Rat Brain Mitochondria Bioenergetics: an In vitro and In vivo Study

“The observed effects also included both an alteration in mitochondrial transmembrane potential and a decrease in oxidative phosphorylation capacity when relatively high concentrations of aluminium were added to the isolated mitochondria. These findings contribute to explain both the ability of aluminium to generate oxidative stress and its suggested potential to act as an etiological factor by promoting the progression of neurodegenerative disorders such as Parkinson’s disease.”

2017 The putative role of environmental aluminium in the development of chronic neuropathology in adults and children. How strong is the evidence and what could be the mechanisms involved?

“Aluminium has no known beneficial physiological action in the human body and some genetic polymorphisms predispose to a greater susceptibility to its adverse effects. Therefore, a strong case can be made for avoiding unnecessary exposure to environmental sources of aluminium salts, especially on the part of children, pregnant mothers and women of child-bearing age who may become pregnant. Such avoidance need not lead to hardship or inconvenience; aluminium cookware may be replaced by safer alternatives, while aluminium-containing antiperspirants, potentially implicated in the rise of cases of breast cancer particularly affecting the upper outer quadrant of the mammary gland, may be replaced by non-aluminium versions. The use of aluminium salts in medical products is a more contentious issue. While antacids are available which do not contain aluminium salts, the avoidance of immunisations which do not contain aluminium salts as adjuvants has wider political and financial implications. It would seem prudent to try to find an alternative to aluminium adjuvants as soon as possible and phase out their use.”

2017 Aluminium in brain tissue in autism.

“The pre-eminence of intracellular aluminium associated with non-neuronal cells was a standout observation in autism brain tissue and may offer clues as to both the origin of the brain aluminium as well as a putative role in autism spectrum disorder.”