This isn’t misinformation . . . this is the missing information.

We’re working hard to bring essential information to the public to protect the right to fully informed vaccination decisions.

Explore our website to see our different areas of focus. To look for specific topics, try the Search function (the magnifying glass in the upper right corner of each page), or go to our Site List page to see a list of every page and post.

If you’re new to the issue, you might be wondering about our billboard that says vaccines are “unavoidably unsafe” according to U.S. Law. In the 1986 National Childhood Vaccine Injury Act which removed financial liability from vaccine makers and those who administer them, Congress placed vaccines in the “unavoidably unsafe” category of pharmaceutical products. Because vaccines must be designed to trigger an immune response, and they contain foreign and toxic substances, and they are susceptible to contamination as well as administration error, there is simply no way to make them 100% safe. The 1986 ACT was supposed to ensure safer vaccines were developed, current science integrated into design and use, and those most susceptible to injury identified. But this has not happened. Instead, HHS has failed to do its legal duty. Steps toward Civil Action are underway.

In the more than 30 years since the Act’s passage, we have experienced something even more alarming: the corporate capture of every single Public Health agency, from the county to the federal level. Public Health officials at all levels who direct immunization programs belong to Drug Company-funded (directly or indirectly) organizations with published missions to remove all personal and religious exemptions (which they call non-medical exemptions to disguise the fact they are going after religious freedom in the USA). They are well-funded, and actively lobby state and federal legislators. They testify at bill hearings in support of legislation that removes and restricts exemptions. These are YOUR health department employees whose salaries are paid by YOUR tax dollars. These groups include:

Physician organizations such as the AAP (American Academy of Pediatrics) and AMA (American Medical Association) are also closely aligned with Drug Companies and have published missions to remove personal and religious medical freedoms. In fact, AAP made the elimination of exemptions their number one priority–not the epidemic of chronic childhood disorders such as learning disorders, developmental disorders, allergies, asthma, cancer — but the elimination of personal and religious exemptions to liability-free highly profitable pharmaceutical products.

Conversations about actual vaccine products, their capabilities, limitations, risks, and unintended consequences, are being censored in major and social media. If the actual PRODUCTS were fully understood by those who set POLICY, and FULLY INFORMED CONSENT respected in all medical offices, then Informed Choice WA would not have to exist.

“The checks and balances in our democratic system that are supposed to stand between corporate power and our little children have been removed, and there’s only one barrier left and that’s the parents.” 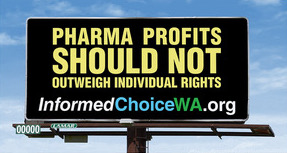 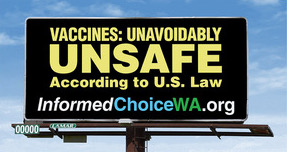 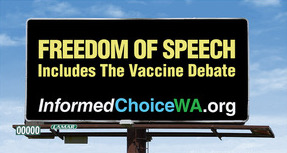 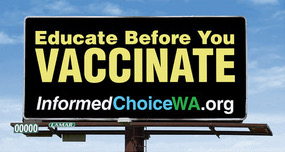 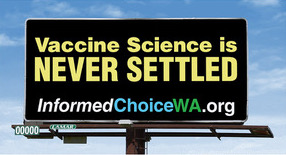 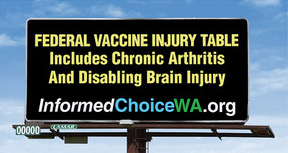