ICAN legally proves CDC has no studies to support their claim that “vaccines don’t cause autism.”

“In summer 2019, ICAN submitted a Freedom of Information Act (FOIA) request to the CDC requesting “All studies relied upon by CDC to claim that the DTaP vaccine does not cause autism.”

ICAN also submitted this same request for HepB, Hib, PCV13 and IPV, as well as requesting the CDC provide studies to support the cumulative exposure to these vaccines during the first six months of life do not cause autism.

Despite months of demands, the CDC failed to produce a single specific study in response to these FOIA requests.

ICAN was therefore forced to sue the CDC in federal court, where the CDC finally conceded, in a stipulation signed by a Federal court judge, that that it has no studies to support that any of these vaccines do not cause autism.

In the stipulation, the CDC was only able to identify 20 studies:

-One relating to MMR (a vaccine ICAN did not challenge)

-Five relating to both MMR and thimerosal

– One relating to antigen (not a vaccine) exposure.

On the CDC’s list of studies was a recent review by the Institute of Medicine (IOM), paid for by the CDC, which conducted a comprehensive review for studies relating to whether DTaP does or does not cause autism. The result was that the IOM could not identify a single study to support that DTaP does not cause autism.  Instead, the only relevant study the IOM could identify found an association between DTaP and autism.

In other words, the CDC listed a review in response to the FOIA requests that proves that there are no studies to support that DTaP does not cause autism.”

ICAN did not (yet) challenge the 20 (not exactly the mountain often claimed) studies identified by the CDC that relate to MMR, thimerosal, and antigens. We hope they pursue such a challenge. Much has been written abut the design of those studies and the authors conclusions. We wonder if those working at the CDC have actually read them — especially the “antigen” study, which is surely the one they refer to on their website.  We are working on a project which will soon be posted . . . below is a preview of one of the slides, which is about that “antigen” study (think “tobacco science” — studies where everyone in the study smoked cigarettes, some a little more, some a little less, the study measured cigarette-tar exposure, and the rates of cancer were the same in all groups.) 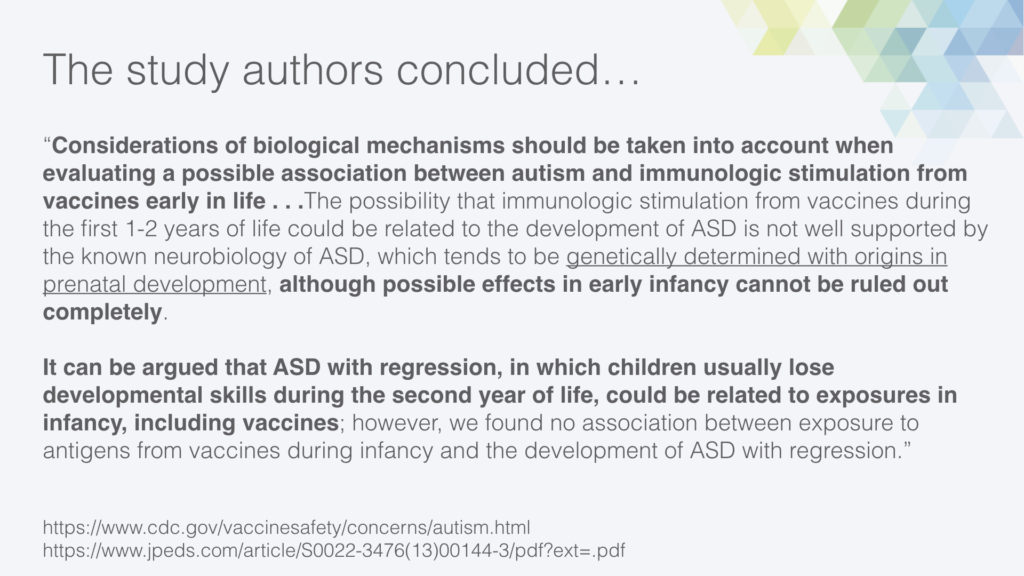 Does that sound like settled science? And if antigen (just one part of a vaccine and not the only component capable of provoking an immune response) exposure levels are not a factor in vaccination leading to regressive autism in some individuals, then what is? What are the individual risk factors? And what in the vaccines, or about the immune response to vaccination at critical stages of immune and neurological development, might cause injury in these susceptible individuals? The study raises far more questions than it answers.