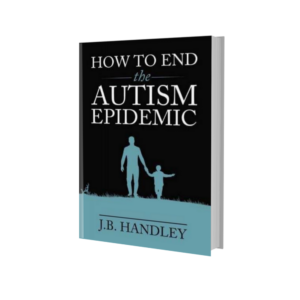 As a reader, and professionally as a published author, I have written many book reviews. Never have I written one so personal. I’m 55 years old. When I was growing up in the 1960’s, 70’s, and even early ’80’s (I graduated high school in 1981), I didn’t know anyone with food allergies. I vaguely recall hearing about asthma, but no one I knew personally had it. I didn’t know anyone with autism, ADHD, or any of the many chronic immunological or neurological conditions children have today.

The most common lunch in my era was a peanut butter and jelly sandwich washed down with a carton of milk.

That lunch would put my son in the hospital.

I didn’t know anyone, or of anyone, who died of or were harmed by any infection now targeted by vaccines. I and my classmates had been given a couple shots in our toddlerhood, and that’s it. There were no school mandates for vaccination, no talk of a need for them. My favorite sitcoms, like The Brady Bunch, used common childhood illnesses as plot devices.

But all that has changed. Perceptions of infection, of history, of vaccines, has dramatically changed since the 1986 National Childhood Vaccine Injury Act was passed, removing liability not only from vaccine makers but from those who administer them, setting in motion the most successful, most highly funded, global marketing campaign in history . . . and the corporate capture of our public health agencies. Everyone is in partnership to push vaccines in this dangerous ‘regulatory vacuum’ as Justices Sotomayor and Ginsberg described it in 2011, in which nobody is responsible to see that current science is included in vaccine design, administration, and policies.

But now we have JB Handley’s book. His brilliant, honest, highly-cited book that rips away the marketing veil away and reveals the truth about autism, and what we need to do to stop the epidemic. This is the most important book to be published in my lifetime. JB didn’t write this book to profit from it (he’s donating all profits to organizations dedicated to healing those with autism), he wrote it to educate, to awaken, and to inspire.

Below is the book’s Table of Contents. I’ve added excerpts to each section. I hope everyone reads this book and ensures their doctors, friends, family, elected officials, and those in public health read it, too.

HOW TO END THE AUTISM EPIDEMIC

The Lies about Vaccines and Autism

In 1970, in the Archives of General Psychiatry, a baseline for autism’s preva- lence was established.34 Using data from Wisconsin, Dr. Darold Treffert and colleagues sought to “identify the incidence and prevalence of childhood schizophrenia and infantile autism in an entire state population age 12 and under.” This was the first time a thorough process had been undertaken to identify the autism rate, and Dr. Treffert and his team looked at roughly 899,000 kids. His finding: 0.7 children per 10,000 “fit the definition of classic early infantile autism.” This is the study where the widely used “1 in 10,000” figure comes from.

Most people have at least a little bit of cynicism when it comes to the pharmaceutical industry. Approval ratings for “Big Pharma” aren’t much higher than for members of Congress. A journal study published in 2013 titled “Undue Industry Influences that Distort Healthcare Research, Strategy, Expenditure and Practice: A Review” by University College London researchers looked carefully at how the pharmaceutical industry influences medical research, policy, and practice. What they found won’t surprise you too much:

To serve its interests, the industry masterfully influences evidence base production, evidence synthesis, understanding of harms issues, cost-effectiveness evaluations, clinical practice guidelines and healthcare professional education and also exerts direct influences on professional decisions and health consumers. . . . As a result of these interferences, the benefits of drugs and other products are often exaggerated and their potential harms are downplayed, and clinical guidelines, medical practice, and healthcare expenditure decisions are biased.

So of the first twenty vaccines given to American babies, how many have been studied for their relationship to autism? None. That’s right, because only one vaccine, the MMR, has ever been studied for its relationship to autism. The MMR is a vaccine first administered to American children at thirteen months of age. But what about the two-month, four-month, and six-month “well baby” visits during which children receive so many vaccines? The truth is none of those vaccines have ever been studied or considered for their relationship to autism, so no one has any idea. This would be like trying to identify the source of a plane crash, suspecting mechanical failure, solely analyzing one of the wings, and then declaring the entire airplane free of culpability.

[Under-oath deposition of Dr. Stanley Plotkin interviewed by Mr. Siri . . Dr. Plotkin is the most revered man in vaccines today; he has been involved with vaccines for decades, and he has become a multi-millionaire by working for pharmaceutical companies and serving on boards of pro-vaccine organizations. Alarming details are in the book.]

Mr. Siri: But since, Dr. Plotkin, we don’t know whether DTaP or Tdap cause autism, right, it would be a bit premature to make the unequivocal, sweeping statement that vaccines do not cause autism, correct?

Dr. Plotkin: In the absence of evidence, one should not draw any conclusions except that there’s no evidence. And so I don’t infer from the absence of evidence about a million different things that they’re necessarily true. One has to do studies to determine whether or not a phenomenon exists, and usually those studies are done because there’s some suspicion that, of a relationship. But in, we have no suspicions, at least I don’t, that autism is caused by DTaP.

Mr. Siri: Well, you may not have that suspicion, but it is one of the most commonly reported conditions, adverse events, which is why it was reviewed in this IOM report from DTaP/Tdap, which we discussed earlier. So I just, I’m not saying, I’m not asking you to say that vaccines do cause autism. I’m not asking that at all. I’m asking you, as a scientist, can you make the statement that vaccines do not cause autism if you don’t know whether DTaP or Tdap cause autism?

Dr. Plotkin: As a scientist, I would say that I do not have evidence one way or the other.

The Truth about Vaccines and Autism

Since 2004 there have been eleven groundbreaking discoveries in separate but related scientific fields that, taken together, reveal the cause of autism. Because of this science, we now know that autism is created by immune activation events in the brain during critical phases of brain development, typically by the time a child is thirty-six months old, and that these immune activation events in the brain can be triggered by the aluminum adjuvant in vaccines. While the first of these discoveries occurred in 2004, the critical missing pieces have only fallen into place since 2010. What you’re about to read is arguably the most important chapter in this book; in it I will walk you through each of these eleven discoveries and its significance.

6  The Clear Legal Basis that Vaccines Cause Autism 170

“I also find, with a high degree of medical certainty, that the set of immunizations administered to Yates at age 11 months while he
was ill was the immediate cause of his autistic regression because of the effect of these immunizations to further impair the ability of his weakened mitochondria to supply adequate amounts of energy for the brain, the highest-energy consuming tissue in the body.”

What unmoored me, however, was a tradition initiated by the Vaxxed team following each screening. As the lights came up after the first screening I attended and we panelists walked down the aisles for the Q&A, Polly made a request on her portable mic. “If you or a family member has been injured by a vaccine, please stand up.” Easily half the audience rose, in quiet solidarity. Emotion flooded my head, throat, and heart. It was the same— the sheer number of people, the overwhelming emotion—following every screening. Polly, I realized, had already experienced this a few hundred times.

[I was in that audience, along with my co-president, Drella Stein. We were among the standing. Vaccine injury is not rare. It’s just not acknowledged or reported.]

A Reckoning to End the Epidemic

What follows are my recommendations for how to end the autism epidemic. Consider it a twelve-point plan to dramatically reduce the rate of autism in the United States . . .

Children are recovering from autism every day. Typically, their parents implement biomedical intervention, the symptoms that defined the autism disappear, and the children go on to lead a normal life. In 2008 Lisa [JB’s wife] and I produced a twenty-six-minute documentary called Autism Yesterday. It told the story of five children and their families recovering from autism. Today three of those children are either in college or on that path!