ICWA’s mission is to educate and advocate for Scientific Integrity in Public Health Policy. It has recently been announced by the CDC, and WA State school officials, that next fall, school will not look “normal.”

Despite the studies and data showing children are not at risk of poor infection outcomes if exposed to SARS-CoV-2, and they are likely not a major source of infection spreading, plans are being conceived that include spacing desks, mask-wearing, severe restrictions on movement, banning of assemblies and field trips, and sterilizing everything constantly.

Despite the fact that at the population level, the infection survival rate is estimated to be 99.6-99.9% (based on estimated Infection Fatality Rates of .1 – .4%), these potentially psychologically damaging measures are being considered — rather than setting children free to be children, to learn, laugh, interact, and yes, swap microbes, which is an essential part of individual and societal immune health. We are social, microbial beings. Fearing viruses makes no sense–it is individual susceptibility to infections that history and science have shown to be the real issue that needs to be addressed.

WE ARE SOCIAL, MICROBIAL BEINGS

Worldwide, the subpopulations of those who are susceptible to poor infection outcome are known. The largest of those subpopulations reside — not in schools or daycares — but in nursing care facilities. Those individuals DO need extra care taken. Those who care for them and visit them should take extra precautions, and the immune health needs of the residents must be addressed and supported. Protection includes those nutrients that support all aspects of their immune defenses, and they need safe and effective treatment protocols–which DO EXIST to help them recover.

In a free society, journalists serve to protect the public from government and corporate overreach and fraud. The government and media handling of COVID-19 reveals we do not live in a free society. As Robert F. Kennedy, Jr. recently said, “Journalism is not an appeal to authority.” And yet all major media outlets are deferring to and siding with “authority” instead of digging deep and challenging the draconian measures being taken and being considered.

In Washington State, the largest newspaper, the Seattle Times, has four staff members on their “Education Lab” — funded by the Bill and Melinda Gates Foundation.

Bill Gates has captured the globe by funding at some level —  well, just about everything. Examine anything related to global health, vaccines, electronic tracking and surveillance, fear of disease, and control of public health and behavior, and you will find a connection to the Gates Foundation or Bill Gates. 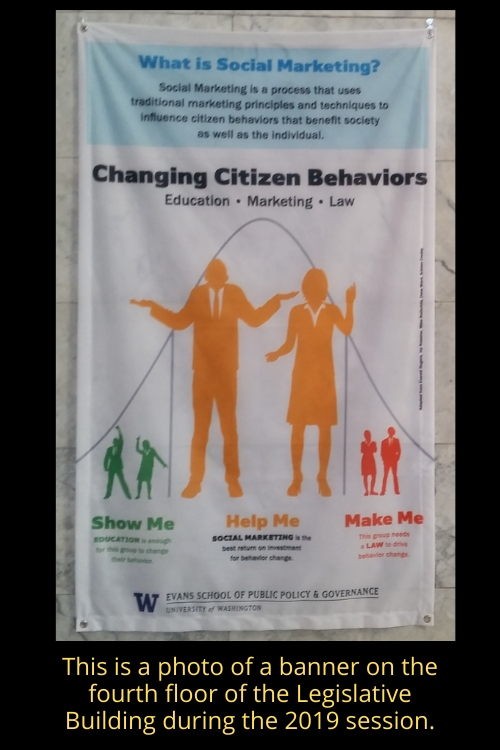 The banner above hung prominently in the Capitol Legislative Building in Olympia during the 2019 session. History is replete with examples of governments using “social marketing” to push their agendas.  Another name for this is “propaganda.”  The University of Washington’s Evans School of Public Policy & Governance has an advisory board member from–you guessed it — the Bill and Melinda Gates Foundation.

Gates’s dystopian view of the world saturates Public Health from the CDC to the WA State Department of Health (which has serious conflicts of interest with Pharma) to the Office of Public Instruction to the newspapers that should be looking very critically at what is happening. The Seattle Times, indeed all major media outlets, state in writing their content is not influenced by their sponsors or those they partner with. But their content shouts otherwise.

After decades of social engineering — with a major push happening over the past five years — legislators and business owners have been backed into positions where they don’t fear disease, they fear being accused of spreading disease.  And this creates the ultimate in control. Is this the future you want to live in? With it being a crime to simply have the potential to spread infection? With everyone cowered and covered?

Or do you want to live as we are meant to live — free. You decide. Then act.