What We Can Learn From A Pandemic “Tabletop Exercise”?

We are living in unfamiliar times. We are frightened by the highly infectious coronavirus CoV-2019 or COVID-19, and our hearts go out to those who have been directly affected. We are in a global “lockdown,” “sheltering in place,” against an invisible but potentially deadly enemy. Our world has changed rapidly and dramatically since the World Health Organization (WHO) declared a pandemic on March 11, 2020.

Most of us are still in a kind of shock usually limited to wartime. It remains hard to believe that countries around the world are ordering businesses and schools to shut down, citizens to stay home, and pausing all communal life to preserve the public health. We have moved to a world of physical isolation and only virtual connection to friends and community. The world’s economy is on the brink of a depression to avert the worst-case public health scenario.

Although most of us have been caught by surprise, some in business and government circles have been preparing for just such a pandemic for a long time. On October 18, 2019, the Johns Hopkins Center for Health Security, the World Economic Forum, and the Bill and Melinda Gates Foundation together convened a group of fifteen participants from leading industries and global institutions to participate in a fictional pandemic exercise entitled “Event 201.” This invitation-only “tabletop exercise,” a term typically used for wargames, occurred at the Hotel Pierre in New York City.

After the day-long exercise, the consortium produced several high quality videos of their deliberations. “Event 201” has six segments: an 11-minute “highlights” video and five additional segments of about an hour each on 1: Countermeasures, 2: Trade and Travel, 3: Finance, 4: Communications, and 5: Hotwash and Conclusion.

Key participants at the table were representatives of the Johns Hopkins Center, the Gates Foundation and the World Economic Forum, which were the institutions sponsoring the exercise. The corporate and government participants’ names and affiliations are below. (Governments also conduct their own simulation exercises; the press recently reported on a Trump Administration drill called “Crimson Contagion.”)

Missing from Event 201 were legislators; representatives of small and medium-sized businesses; labor; social media; religious leaders; and civil society unaffiliated with intergovernmental and corporate organizations. In short, the participants were a heavyweight group of corporate executives, policymakers, and health officials. Left out were representatives from many sectors likely to be hardest hit by such a scenario.

Coincidentally, the participants addressed a simulated global pandemic from a coronavirus that initially showed up in bats, then pigs, and finally  jumped to humans before spreading rapidly around the world despite the players’ best efforts. The simulation imagined no available vaccine. In the background, rhythmic music pulsated in a minor key.

The pandemic scenario had the following parameters:

The scenario ends at the 18-month point, with 65 million deaths. The pandemic is beginning to slow due to the decreasing number of susceptible people. The pandemic will continue at some rate until there is an effective vaccine or until 80-90 % of the global population has been exposed. From that point on, it is likely to be an endemic childhood disease.

The organizers pulled vignettes from the five plus hours for the “Highlights target=”_blank”” below.

The participants first address travel advisories and bans as they learn that travel industry revenues have dropped 45%. The World Bank Group representative explains that to rely on the United Nations in such a situation would be “delusional.” The world must turn to the private sector for “efficient leadership.” The Gates Foundation representative notes that only the private sector has the knowledge to negotiate the complex supply chain issues, underscoring the need for a “new kind of public-private collaboration.”

The participants learn from a news report that the stock market has fallen 20-40%. The discussants wonder if there are institutions that they “cannot allow to fail.” They see governments as the best source of financing and discuss tax breaks and subsidies to “escalate entrepreneurship.” The U.S. CDC representative adds that “it’s really a war footing we need to be on.”

“The banker also questions whether there might be a technological answer to the problem, perhaps implying online censorship.”

Next, the participants tackle the question of intentional “disinformation” and accidental “misinformation.” They note that “limited internet shutdowns are being implemented to quell panic.” They worry that “misinformation is undercutting efforts to control the panic.” The representative from Edelman, a global PR behemoth, notes that social media companies must now step up as “broadcasters” and no longer just see themselves as technology platforms. They must “counteract, if not flood the zone” with accurate information based on partnering with “the scientific and health communities.” The representative of the Monetary Authority of Singapore wonders whether governments might not step up their enforcement actions against “fake news.”

By contrast, the private sector banker at the table remarks that it is “neither practical nor desirable” to shut down information, but agrees that the “flood strategy” is promising, capitalizing on “trusted sources of information.” The banker also questions whether there might be a technological answer to the problem, perhaps implying online censorship.

Effects of the Pandemic

In the video epilogue, the narrator states that 65 million people died in the first 18 months. While the numbers at first seemed controllable, the disease spread to densely populated, impoverished megacities where the death toll exploded. Within six months, cases occurred in nearly every country, and the “global economy was in a freefall.” She explained that the economic effects “lasted for years, perhaps a decade.” But even more significantly, she outlined that the societal impact – “loss of faith in government, distrust of news, breakdown of social cohesion – could last even longer.” Finally, she asked if we could have done anything differently, and answered, “yes.” She concluded, “Are we as a global community now finally ready to do the hard work to prepare for the next pandemic?”

Many aspects of the Event 201 simulation ring true today. The coronavirus pandemic; new public-private partnerships; travel bans; markets in freefall; a wartime footing; and flooding the information zone with controlled messaging. That the video sponsors are now some of the central actors in the real world crisis only amplifies the simulation’s significance.

Just two months after the New York simulation, China announced the first case of COVID-19 on December 31, 2019. Chinese scientists identified and isolated the virus on January 7, 2020. On January 22, 2020, the WHO Emergency Committee “expressed divergent views on whether this event constitutes a Public Health Emergency of International Concern (PHEIC) or not.”

At around the same time, the World Economic Forum met in Davos, Switzerland, January 21-24, 2020. WHO Director General Tedros Adhanom Ghebreyesus as well as other Event 201 participants were there. On January 24, another Gates Foundation entity engaged in vaccine development, the The Coalition for Epidemic Preparedness and Innovations (CEPI), held a press conference at the World Economic Forum in Davos to provide an update on the outbreak, and announced a new partnership to develop vaccines for the virus as quickly as possible – before the outbreak b a global epidemic.

Some speculate that the WHO decision to declare the emergency was made on the sidelines of the Davos meeting, perhaps in connection with the CEPI decision to prioritize coronavirus vaccines. The WHO Emergency Committee meeting in Geneva occurred in the same time frame on January 22. While any direct connection remains uncertain, Director General Tedros Adhanom Ghebreyesus declared the Public Health Emergency of International Concern on January 30, 2020. The World Economic Forum immediately pledged its assistance, creating the COVID Action Platform, thus turning the fictional exercise into a high level working group behind the WHO. On January 31, 2020, the U.S. announced a travel ban on China, and events have evolved quickly since then.

Mr. Ghebreyesus has been the WHO Director General since 2017. He’s the first African director and the first Director General who is not a physician. As Ethiopia’s Minister of Health, Mr. Ghebreyesus chaired the Global Fund to Fight AIDS, Tuberculosis and Malaria that the Gates Foundation co-founded. Today, the Gates Foundation is the WHO’s largest donor after the U.S., and the major funder behind the Global Alliance for Vaccination and Immunization (GAVI),another WHO funder.

Is There Any “Benefit” to the Catastrophe?

The Event 201 tabletop exercise shows us the kind of thinking going on as this crisis unfolds. It begs the question whether there can be any “benefit” from such a catastrophe.

According to the August 2019 Gallup poll below, before the crisis, the healthcare industry, the federal government, and the pharmaceutical industry were at the very bottom of the public’s esteem. Negative perceptions ranged from minus 48% for healthcare, minus 52% for the federal government, to a stark minus 58% for pharma. The only other sector in negative territory was the advertising and public relations industry, also represented at the Event 201 table. 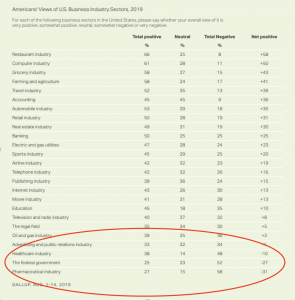 The public may have held negative perceptions for a number of possible reasons:

“The COVID-19 virus has played a stunning role, shifting public perceptions almost overnight, lifting up the sectors that had been just months ago at the bottom.”

Remarkably, the pandemic seems to have pushed a “global reset” button. Pharma and biotech companies are racing to produce new coronavirus vaccines, with the expectation that the world’s population will clamor for them. Media follows the healthcare sector’s every move, creating genuine heroes among the doctors, nurses and other healthcare workers on the frontlines. Even this Administration, long plagued by low popularity ratings, has reached its highest approval rating ever.

In a crisis, people want strong leaders and want to be on their teams, regardless of political leaning. In the new age of COVID-19, people are tuning in to federal health authorities, Congress, and the President, and grateful for whatever drugs and potential vaccines pharma and the healthcare industries put out. The COVID-19 virus thus has played a stunning role, shifting public perceptions almost overnight, lifting up the sectors that had been just months ago at the bottom. 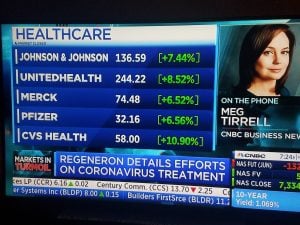 Not to say that people are not critical – they are – but pharma and healthcare stocks are rising, literally and figuratively, while most every other sector is plummeting, and Congress and the President are addressing the crisis and communicating with the public on a daily basis, and people are listening.

Despite all the shifts, one thing is certain: change is the dynamic constant. Who knows what will happen in a month, or two months, or eighteen? “Event 201” offers some important insights into public-private crisis management and what could lie ahead.