“Some of the worst things imaginable have been done with the best intentions.”

Vaccine clinical trials are relatively short and narrowly focused. Researchers cannot find what they do not look for.

Section 13.1 on nearly every vaccine insert states the vaccine “has not been evaluated for carcinogenic or mutagenic potential or impairment of fertility.”

Genetically modified antigens, potent adjuvants, animal and human cellular contamination and residue, and other ingredients are not evaluated for their complete impact on the immune system or developing neurological systems or organ health, and much more. These impacts are only learned after a vaccine is given to the general population. And only if someone spends the time and money paying attention and researching the findings.

Aftermarket reporting is the fourth phase of product assessment–it is a phase that is, or rather should be–perpetually ongoing since environmental conditions and factors can change, altering a vaccine’s impact on individuals and public health.

Currently, we lack a vigorous mandatory adverse reaction reporting system. Most side effects and unintended consequences are not revealed in a timely manner, if at all. And with the 1986 National Childhood Vaccine Injury Act removing product liability from vaccine makers and providers, the financial incentive to find side effects and unintended consequences is non-existent.

The incentive to find true causes may not exist with industry — but incentive overflows in the hearts of parents the world over. We at Informed Choice WA are parents, grandparents, doctors, lawyers, nurses, teachers, scientists — we are from all walks of life, and we share a common goal of restoring the health of children everywhere. We work toward scientific integrity in policymaking and the restoration of fully informed medical consent.

We are building here a library of papers that reveal the unintended consequences of vaccination that must be addressed. More papers to be added soon.

“Resurgence of Pertussis. As reported at the May 2013 BSC meeting, the recent resurgence in pertussis cases has been associated with waning immunity over time in persons who received the acellular pertussis vaccine (which is administered as the pertussis component of DTaP vaccine). However, a recent study suggests another explanation for decreased vaccine effectiveness: an increase in Bordetella pertussis isolates that lack pertactin (PRN)—a key antigen component of the acellular pertussis vaccine. . . . Findings indicated that 85% of the isolates were PRN-deficient and vaccinated patients had significantly higher odds than unvaccinated patients of being infected with PRN-deficient strains. Moreover, when patients with up-to-date DTaP vaccinations were compared to unvaccinated patients, the odds of being infected with PRN-deficient strains increased, suggesting that PRN-bacteria may have a selective advantage in infecting DTaP-vaccinated persons.” (emphasis added)

Rates of developmental disability continue to rise at epidemic rates. 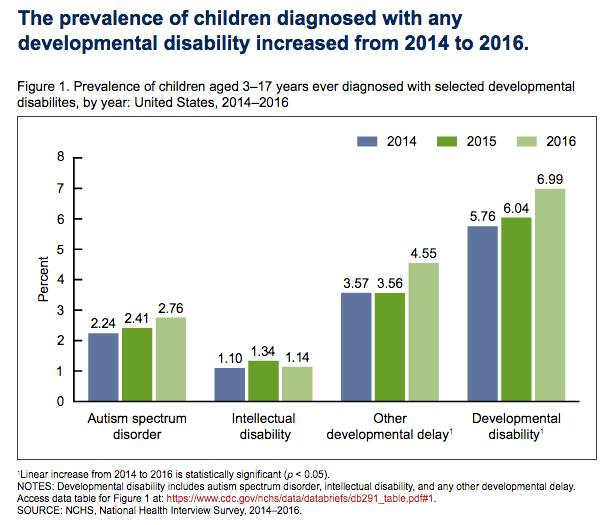