What are mitochondrial diseases or disorders?

In mitochondrial diseases, the mitochondria cannot efficiently turn sugar and oxygen into energy, so the cells do not work correctly.

Mitochondrial diseases and disorders are the same thing.”

Who has mitochondrial disorder?

Mitochondrial disorders can be genetic, epigenetic (changes in gene expression due to environmental exposures), or environmentally induced.

From MitoAction.org: “Infants, children, and adults may develop mitochondrial disorders. Experts in mitochondrial medicine agree there is a spectrum of the disease, ranging from mild to severe.

In adults, many diseases of aging have been found to have defects of mitochondrial function; these include, but are not limited to, Type 2 diabetes, Parkinson’s disease, atherosclerotic heart disease, stroke, Alzheimer’s disease, and cancer. In addition, many medicines can injure the mitochondria.”

From Gastrointestinal dysfunction in autism spectrum disorder: the role of the mitochondria and the enteric microbiome:

“The majority of individuals with ASD and mitochondrial disorders do not manifest a primary genetic mutation, raising the possibility that their mitochondrial disorder is acquired or, at least, results from a combination of genetic susceptibility interacting with a wide range of environmental triggers. “

Oxidative stress induces mitochondrial dysfunction in a subset of autism

What can impair mitochondria?

Many common medications, including antibiotics and Tylenol, have mitochondrial toxicity.

“Medications have now emerged as a major cause of mitochondrial damage, which may explain many adverse effects. All classes of psychotropic drugs have been documented to damage mitochondria, as have statin medications, analgesics such as acetaminophen, and many others.”

Use of these medications at time of vaccination may lead to vaccine injury.   Graphs from MitoActio.org. (Note: this is not a complete list of medications or environmental exposures that can impair mitochondria.) Please see our Tylenol page. While the science is well-established, it has not yet been incorporated into the standard of medical care. See Regulatory Vacuum. 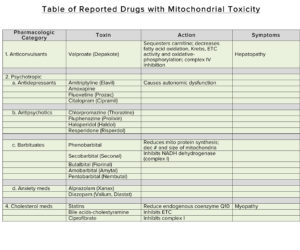 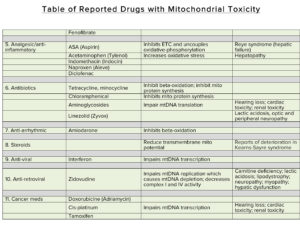 NOTE to item 14. Immunizations shown on graph. “No scientific data on oxidative-phosphorylation adverse effects” does not mean such adverse events don’t exist, it means that at the time the graph was made, there was no “data,” meaning no studies had been done. However, many studies indicate vaccine components can impair mitochondria, including aluminum adjuvants. Please see the Aluminum page.

2014 study Oxidative stress and mitochondrial dysfunction in aluminium neurotoxicity and its amelioration: a review states:

“Aluminum offers another plausible explanation as to why the rate of autism did not decline upon the removal of thimerosal from most vaccines. During the highly publicized phase-out period for mercury in 1999-2002, four doses of a new vaccine with high aluminum content were added to the CDC vaccination schedule. During 2005, another two doses of high-aluminum vaccine were added.”
Dr. Amy Yasko, Aluminum and Mitochondrial Dysfunction and ASD

It has been established that impaired mitochondria impacts vaccination response and can lead to injury.

In 2004, when autism rates were 1 in 500 (rather than 1 in 50) the Immunization Safety Review Committee Board on Health Promotion and Disease Prevention stated:

“The committee’s conclusion did not exclude the possibility that MMR could contribute to autism in a small number of children, given that the epidemiological studies lacked sufficient precision to assess rare occurrences. Thus it was possible that epidemiological studies would not detect a relationship between autism and MMR vaccination in a subset of the population with a genetic predisposition to autism. The biological models for an association between MMR and autism were not established, but nevertheless were not disproved.”

The Hanna Poling case on CBS News:
“There’s no denying that the court’s decision to award damages to the Poling family puts a chink — a question mark — in what had been an unqualified defense of vaccine safety… If Hannah Poling had an underlying condition (Mitochondrial Disorder) that made her vulnerable to being harmed by vaccines, it stands to reason that other children might also have such vulnerabilities.”

“Federal authorities for the first time conceded that there is a connection between a child’s autistic symptoms and the vaccines she received as an infant. Medical evaluators at the Department of Health and Human Services concluded that the child had been injured by the vaccines and recommended that her family be compensated for the injuries. The panel stated that the child had an underlying mitochondrial disease that was aggravated by the vaccines, causing the autistic like symptoms.” http://www.umdf.org/site/apps/nlnet/content2.aspx?c=jtJWJaMMIsE&b=4090771&ct=5315239

Julie Gerberding, Former director of the U.S. CDC told CNN’s Dr. Sanjay Gupta: “If a child was immunized, got a fever, had other complications from the vaccines, and was pre-disposed with the mitochondrial disorder, it can certainly set off some damage (including) symptoms that have characteristics of autism.”

Gerberding states that this dysfunction is “rare”, but other scientists believe 1 in 50 individuals may have a mitochondrial dysfunction.

This recent Vaccine Injury Compensation SIDS case found: “In this case, I have concluded, after review of the evidence, that it is more likely than not that the vaccines played a substantial causal role in the death of J.B. without the effect of which he would not have died. The role of inflammatory cytokines as neuromodulators in the infant medulla has been well described and is likely the reason for a significant number of SIDS deaths occurring in conjunction with mild infection. I have concluded that it is more likely than not that the vaccine-stimulated cytokines had the same effect in this vulnerable infant during sleep. Accordingly, petitioners are entitled to compensation. “ https://ecf.cofc.uscourts.gov/cgi-bin/show_public_doc?2013vv0611-73-0

In 2010, a groundbreaking study by researchers at University of California Davis showed that 80% of the children with ASD enrolled in their study had blood tests indicating mitochondrial dysfunction.