Simone Scott underwent a heart transplant one month after developing what her doctors believe was myocarditis following her second dose of Moderna. She received the second vaccine May 1 and died June 11.

Simone Scott, a 19-year-old freshman at Northwestern University in Evanston, Ill., died June 11 of complications from a heart transplant she underwent after developing what her doctors believe was myocarditis following her second dose of the Moderna COVID vaccine.

Scott received her second dose of Moderna on May 1, WLWT 5 reported. When the 2020 Mason High School graduate and senior class vice president paid a surprise visit to her parents for Mother’s Day, May 9, her mother said she noticed Scott wasn’t feeling well.

“I did notice she was kind of stuffy so her voice wasn’t exactly the same,” Valerie Kraimer said.

Scott returned to campus on May 11, where even after a visit to the doctor, her condition worsened. Kraimer said multiple tests came back negative including a COVID-19 test.

“On Sunday morning [May 16], she texted her father and said, ‘Dad, I feel so dizzy. I cannot get out of bed’ and that’s when everything really started from there,” Kraimer said.

Scott’s parents were hundreds of miles away so her father called campus police to have someone check in on her.

“We learned that a doctor had to jump on her chest and give her CPR because she was that bad, and then the whole cascade of events happened, Kraimer said. “They had to intubate her and realized she was in heart failure.”

After multiple interventions, including hooking Scott to an ECMO machine that mirrors the function of the heart so her own heart could rest, doctors determined she needed a heart replacement. Her doctors have not fully confirmed the cause of her death, but they said it appears Scott suffered from myocarditis.

Myocarditis is inflammation of the heart muscle that can lead to cardiac arrhythmia and death. According to researchers at the National Organization for Rare Disorders, myocarditis can result from infections, but “more commonly the myocarditis is a result of the body’s immune reaction to the initial heart damage.”

Former New York Times reporter Alex Berenson said in a thread posted June 14, the Northwestern journalism student “suffered a case of apparent myocarditis-induced heart failure on Sunday, May 16. Despite extraordinary measures to save her, including a heart transplant, she died Friday morning at Northwestern Memorial Hospital in Chicago.” 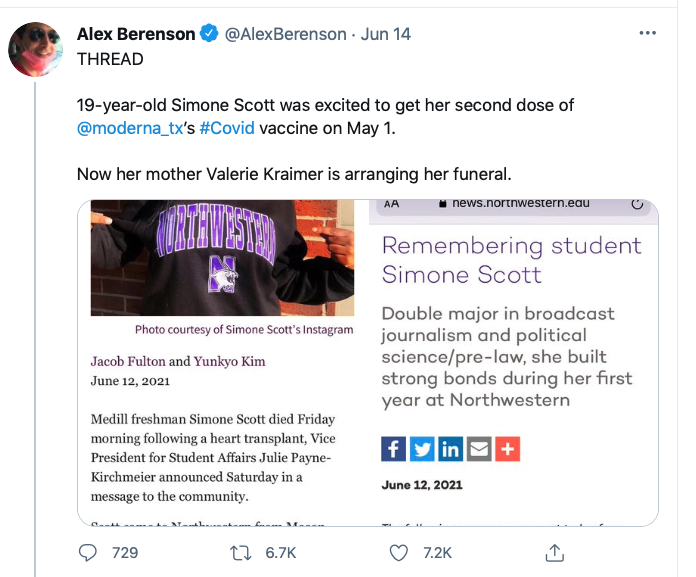 “Doctors appear to have repeatedly missed signals as Scott’s condition worsened in the two weeks following her second shot — before she abruptly crashed,” Berenson said.

Scott received the COVID vaccine on her own accord, but her university now mandates students be fully vaccinated before returning to campus, The College Fix reported.

“I still feel like she’s here, even though I know that she’s not and it just feels like such a waste,” Kraimer said.

Scott’s parents are still waiting on multiple tests on her heart to come back in the hope they will learn why they lost their daughter so suddenly.

As The Defender reported June 11, the Centers for Disease Control and Prevention (CDC) will convene an emergency meeting of its advisers on June 18 to discuss higher-than-expected reports of heart inflammation following doses of Pfizer and Moderna COVID vaccines.

The CDC said during a June 10 meeting of the U.S. Food and Drug Administration’s (FDA) Vaccines and Related Biological Products Advisory Committee the agency had identified 226 reports of heart inflammation that might meet its “working case definition” of myocarditis and pericarditis following the shots, The Defender reported last week.

The CDC’s Vaccine Adverse Events Reporting System (VAERS) revealed 900 cases of myocarditis and pericarditis, among all age groups reported in the U.S following COVID vaccination between Dec.14, 2020 and June 4, 2021. Of the 900 cases reported, 533 cases were attributed to Pfizer, 331 cases to Moderna and 32 cases to J&J’s COVID vaccine.

Dr. Tom Shimabukuro, deputy director of the CDC’s Immunization Safety Office said during the June 10 FDA hearing there had been a higher-than-expected number of cases of heart inflammation among young people recently vaccinated with their second doses of mRNA vaccine. 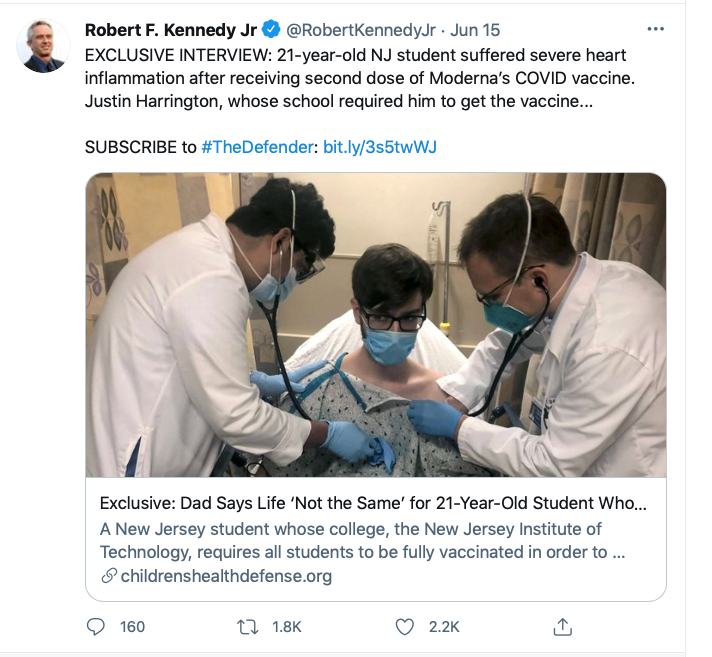 CDC data showed 196 reports of myocarditis and pericarditis among 18- to 24-year-olds through May 31, compared with an expected rate of between eight and 83 cases.

Among 16- to 17-year-olds, 79 cases of myocarditis and pericarditis were reported through May 31. The expected rate among people in this age group is between two and 19 cases, Shimabukuro said during his presentation.

Shimabukuro said the CDC’s findings were “mostly consistent” with reports of rare cases of heart inflammation that had been studied in Israel and reported by the U.S. Department of Defense earlier this year.

Children’s Health Defense asks anyone who has experienced an adverse reaction, to any vaccine, to file a report following these three steps.