On May 12, 2021, the United States Advisory Committee on Immunization Practices (ACIP)voted to recommend the Pfizer investigational  Emergency Use Authorization (EUA) Pfizer shot to children ages 12 to 15.

The ACIP also voted to end restrictions around co-administration with other vaccines even though there has not been a single clinical trial administering any of the shots with any other vaccine. More on this below.

COVID-19 SHOTS DO NOT PREVENT HOSPITALIZATION OR DEATH in ADULTS

Why are young teens being targeted with EUA shots?

This is an age group that does not tend to be susceptible to severe infection, and CDC says from March of 2020 through April 2021, those aged 12-17 made up just 9% of the reported cases and a total of 127 deaths. As with adults, children with underlying health issues are more at risk. Most children experience low to no symptoms and several studies now show that natural immunity is robust and likely long-lasting. 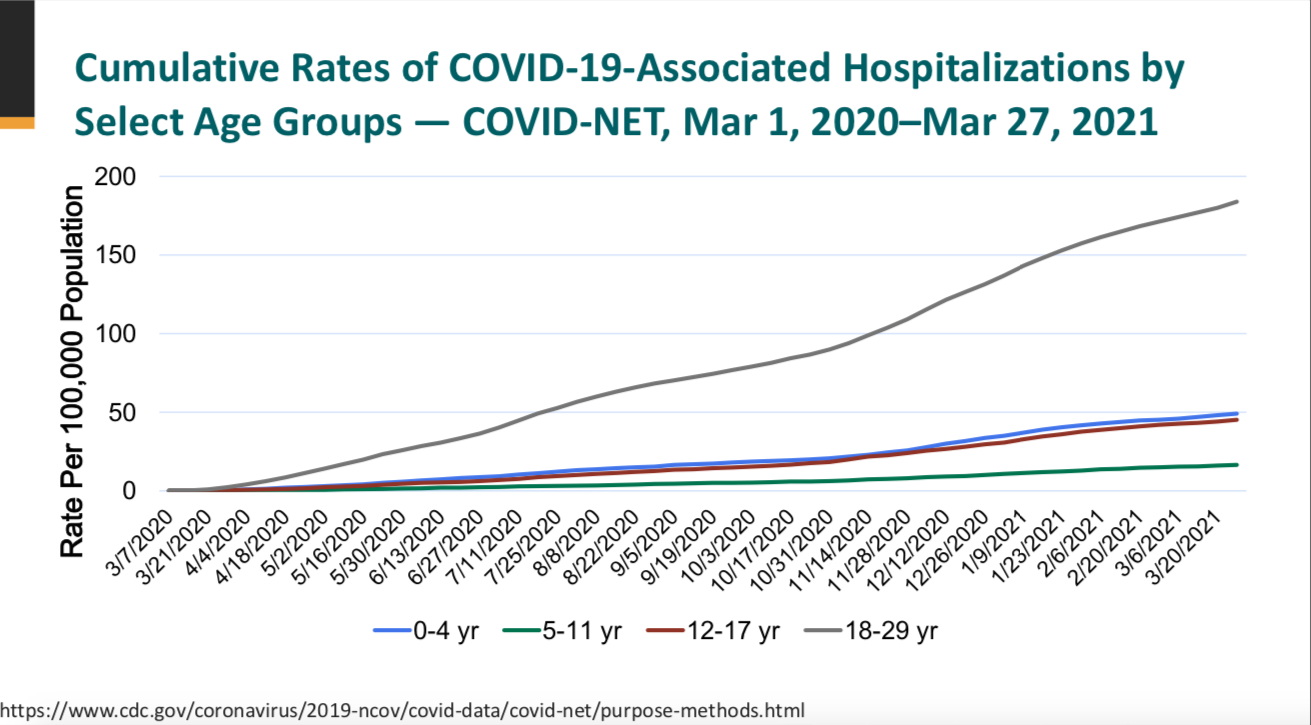 There are concerns that some children are experiencing something called multisystem inflammatory syndrome (MIS-C) associated with SARS-CoV-2 infections. As of May 3, 2021, there have been 3742 cases, the majority of whom recovered, but 35 were fatal.  A case study says:

“MIS-C is considered to be caused by a late response to SARS-CoV-2 infection, as some patients have a negative RT-PCR but a positive IgM/IgG serology, highlighting the involvement of aberrant innate immunity as the main mechanism. There is also evidence that antibodies to SARS-CoV-2 accentuate the disease through a facilitating mechanism that enhances viral entry or antibody replication as has been observed in dengue.” (PMID: 33984083)

Why is that important in regards to the Pfizer shot in children? Because the Pfizer shot, along with Moderna and the Janssen/J&J shots, all work by getting the recipient’s own cells to make a synthetic, genetically altered, stabilized version of the part of virus now known to cause the most severe outcomes—the spike protein. The recipient’s immune system then creates antibodies to that spike protein. Will antibodies to the vaccine-induced spike protein cause MIS-C in some children? We have no idea. The study was far too small to catch rare outcomes. But discoveries in September 2020 should have led vaccine companies and the FDA to move with extreme caution:

“Rostad and colleagues found that children with MIS-C had substantially higher levels of antibodies against a particular part of the COVID-virus known as the receptor binding domain (RBD), part of the virus’ spike protein that lets the virus invade cells. While not definitive proof, the findings suggest that a stronger immune response against RBD may be associated with MIS-C, either as simply an indicator or potentially in some sort of causal relationship . . .RBD is a component of many of the COVID-19 vaccines in development, Zeichner and Cruz write, so the new findings may prove important there as well. If some antibodies against RBD are associated with MIS-C or increased inflammation, it would be essential to carefully evaluate subjects enrolled in the vaccine clinical trials for evidence of increased inflammatory responses, particularly if and when those research subjects are exposed to and infected with the COVID-19 virus.”

While we of course want to protect children from severe disease and from MIS-C, there is zero evidence any of the shots are capable of doing this, or if they will instead cause these outcomes. What should be done is to look for underlying factors for why some children are experiencing severe disease or MIS-C after exposure to the virus so we can better protect and recover them. Obesity has been associated with both, and obesity is associated with low Vitamin D levels.

Do the shots even work to prevent infection? Pfizer claims their shot is 100% effective at preventing infection in 12-15 year olds, but that’s deceptive. 100% is the RRR — the Relative Risk Reduction. That’s how many kids showed “evidence of infection” in the Pfizer shot group verses the placebo group, from 7 days post the second shot until the cutoff date (length of time varied per participant, depending on when they got the shot).

FDA states about the Pfizer’s clinical trial with 12-15 year olds:

Just like with adults, the studies were not designed to find out if the shots prevent infection or transmission, only if they prevent mild to moderate symptoms, and it’s unknown how long any personal protection afforded might last.

It’s very clear that the shots don’t prevent infection, serious disease, or fatalities. In an alarming and highly unscientific move, the CDC has decided to stop telling the public the full number of breakthrough cases reported, and only pass on the numbers of fully vaccinated individuals who get COVID-19 anyway and are hospitalized or die.

These numbers are nearly a month old (April 26, 2021) and the most recent being provided.

Does the CDC not see those numbers as signals of product failure?

INTENTIONAL DECEPTION WITH RRR RATHER THAN ARR

For this most recent EUA, Pfizer’s claim, repeated by the CDC, that the shot is “100%” effective in 12-15 year olds might accurate for the study outcome (although the term “efficacy” is more appropriate), but it’s also very deceptive. 100% is the RRR — the Relative Risk Reduction. That’s how many kids showed “evidence of infection” in the Pfizer shot group verses the saline placebo group, from 7 days post the second shot until the cutoff date (length of time varied per participant, depending on when they got the shot).

But the risk of getting COVID-19 at all was already very small. How much did the shot reduce the risk of getting sick? That’s the ARR–the Absolute Risk Reduction. While the FDA advises ARR to always be reported with RRR so that individual and public policy decisions can be soundly made, ARR is rarely every mentioned.

So the shot–in this short, limited study–reduced the risk of getting COVID by 1.6%.

If we can trust the data. The general public has no idea that all of the studies are conducted by the manufacturers who stand to profit, and they turn in their data to the FDA. It is an honor-system among entities that have a history of criminal fraud.

As unethical as it is to expose children to investigational liability-free products that have seen unprecedented level of vaccine adverse reactions and deaths reported (as of May 7 there have been 192, 954 adverse events reported, including 11,572 hospitalizations, and 4057 deaths), when the ACIP opened up the shots to be co-administered with other vaccines, including those with adjuvants, they stepped fully into crimes against humanity.

Not a single clinical trial has been done administering the COVID-19 shots with any other vaccine. There is zero safety data. The updated Pfizer EUA Fact Sheet states:

Below is the image of a slide captured during the live ACIP Meeting. The last two bullet points were added by the committee after hearing the grave concerns in several public comments. 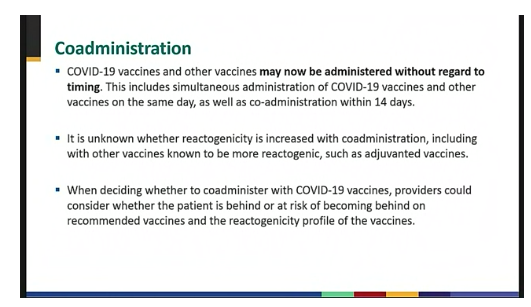 See the above slide at timestamp 15:48 in this video

Watch this video to hear the public comments.

After the 14-0 vote with one abstention to recommend the Pfizer EUA shot to 12-15 year olds, with no restriction on co-administration with other shots, some ACIP members gave their reason.

They only had one.

They don’t want to miss an opportunity to vaccinate.

That’s it. Science be hanged, safety unknown, by gosh, they didn’t want doctors to miss an opportunity to give other vaccines.

I will repeat. Zero safety studies.

What happens when a 12-year-old is injected with Gardasil with its highly reactogenic aluminum AAHS adjuvant in one arm and the Pfizer mRNA shot in the other? What happens when the child’s cells begin pumping out spike protein in the presence of another vaccine adjuvant that is revving up their immune system to go on the attack?

We have no idea.

What on earth were the members of the ACIP thinking? Why would they make a recommendation based on zero safety science?

As revenues for several Big Pharma players slumped to start the year, execs blamed part of the problem on the accelerating COVID-19 vaccine rollout. The CDC had recommended people don’t get another shot within two weeks of their COVID-19 vaccine, hitting sales for key products.

Now, the CDC is doing away with that suggestion entirely in an effort to boost routine immunizations among teens. The move could spell financial rewards for leading vaccine companies such as Merck, GlaxoSmithKline and Pfizer.

During the CDC’s Advisory Committee on Immunization Practices (ACIP) meeting on Wednesday, experts endorsed the COVID-19 shot from Pfizer and BioNTech in adolescents aged 12 to 15 and additionally tossed out the agency’s two-week restriction on administering other vaccines.

Over the past few years, vaccine safety reform and medical freedom advocates have attempted to show the public and local public health agencies examples of ACIP votes that have put the public at risk. Nothing has come close to the atrocity of this blatant handing of the American public, and America’s children, to the drug industry.

State and local health officials follow ACIP’s recommendations, seeming oblivious to the danger. King County Health Officer Jeffrey Duchin was taking questions from callers on KUOW on May 24. I called in to see if he would help ensure parents understood their are no co-administration safety studies. Below is the audio clip. SOURCE.

We need your help letting parents know that the EUA recommendation to children is based on very limited data, and the co-administration of the EUA shots with other vaccines has zero safety studies. Please share this article everywhere. Send it to your legislators & major media, provide the link in comments to social media posts for the local and national news agencies. Post wherever parents can be found.

Tell the world, and ACIP, our children are not for sale.