The bias of the authors is undeniable:

Vaccine hesitancy threatens to compromise global vaccination efforts . . .. Conspiracy theories propagated through social media cast doubts over the safety of these novel vaccines for fertility and breastfeeding. . . One such claim generating significant traction suggests that vaccine mRNA-translated antibodies – which target the SARS-CoV-2 spike protein – cross-react with human syncytin-1, resulting in infertility and pregnancy loss. . . Although attempts have been made to correct this misinformation by mainstream news outlets and the scientific community, anti-vaccination pundits continue to propagate vaccine scepticism and dampen confidence in vaccine safety.

Even so, the results of their study do not support their biased hopes to lay the concern to rest. In fact, their results confirm what they try so hard to deny: a statistically significant increase in anti-syncytin-1 antibodies after getting the Pfizer shot. 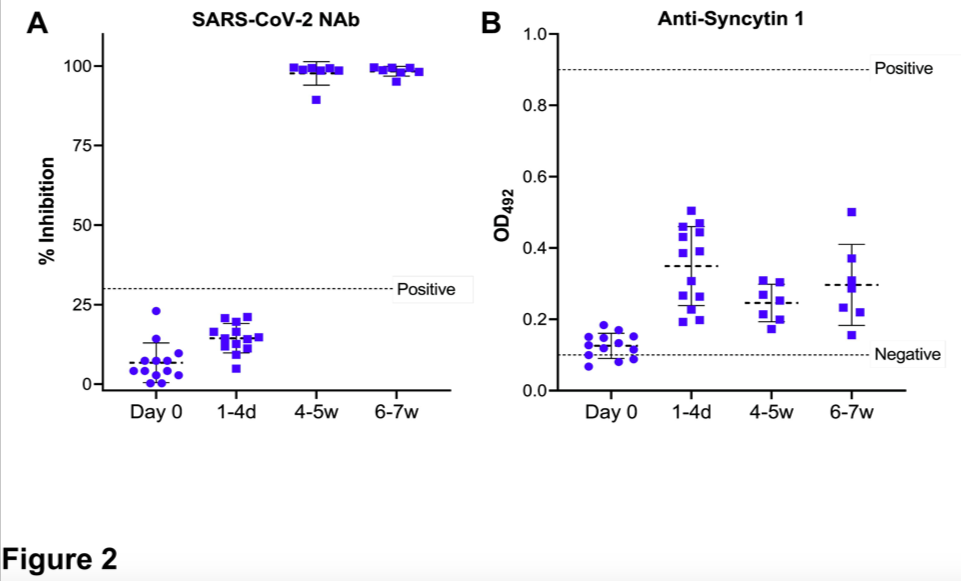 What do the authors say about the data in Figure 2?

Anti-syncytin antibodies were not detected in post-vaccination plasma

To determine if recipients mounted the desired immune response to BNT162B2, we first analysed SARS-CoV-2 neutralising antibodies (NAb), finding negative responses at day 0-4 (post-vaccination inhibition at 14.7±4.7%), and strongly positive responses 4-7 weeks post-vaccination (inhibition at 98.7±1.2%, p<0.001, Figure 2A), including in the pregnant women (inhibition >89.0% following a single dose). At the same time-points, anti-syncytin-1 binding activities were far below the positive control and were interpreted as negative (Figure 2B). (emphasis added)

Mentioned in the video:

Title: High prevalence of the antibody against Syncytin-1 in schizophrenia

Several vaccine candidates are expected to induce the formation of humoral antibodies against spike proteins of SARS-CoV-2. Syncytin-1 (see Gallaher, B., “Response to nCoV2019 Against Backdrop of Endogenous Retroviruses” – http://virological.org/t/response-to-ncov2019- against-backdrop-of-endogenous-retroviruses/396), which is derived from human endogenous retroviruses (HERV) and is responsible for the development of a placenta in mammals and humans and is therefore an essential prerequisite for a successful pregnancy, is also found in homologous form in the spike proteins of SARS viruses. There is no indication whether antibodies against spike proteins of SARS viruses would also act like anti-Syncytin-1 antibodies. However, if this were to be the case this would then also prevent the formation of a placenta which would result in vaccinated women essentially becoming infertile. To my knowledge, Pfizer/BioNTech has yet to release any samples of written materials provided to patients, so it is unclear what, if any, information regarding (potential) fertility-specific risks caused by antibodies is included.

April 23, 2021: At the Advisory Committee on Immunization Practices ACIP) Dr. Janci Chunn Lindsay spoke during the public comment time about her concerns about anti-Syncytin-1 antibodies. An excellent article about this can be found at JenniferMargulis.net

These examples are not isolated. Globally, efforts are being made to pull all the COVID-19 vaccines due to these and other safety concerns that have not been properly studied.