The Seattle Department of Education and Early Learning has released a comic book titled Handbook for Health Heroes. It comes with a subtitle: Answers to Your Family’s Questions about COVID-19 Vaccines for Kids.

The cover is a sketch of a boy in a boxing position wearing a mask, a Band-Aid on his arm, a red cape, and a T-shirt with an illustration of  a syringe and needle on the front.

The comic book then answers the following six questions:

The concluding headline above the image of four children, standing with arms akimbo and wearing a mask, is “COVID-19 Vaccines Are Safe, Effective, and Free.”

The news of the Seattle comic book spread across the nation to Children’s Health Defense President Mary Holland, who resides in New York, She said following on CHD-TV:

“We’ve seen this before with children, trying to convince themselves that the children will go to the parents and say, ‘Mommy, Daddy, I want to be a superhero, too.’ This is a despicable, low level of propaganda, and it’s interesting that one of the things that the article (in Northwest Asian Weekly) mentions about the comic book is that it’s specifically trying to teach children what is misinformation and don’t accept the misinformation that these vaccines might be dangerous.”

The Art and Science of Naturopathic Medicine in Washington Federal Court 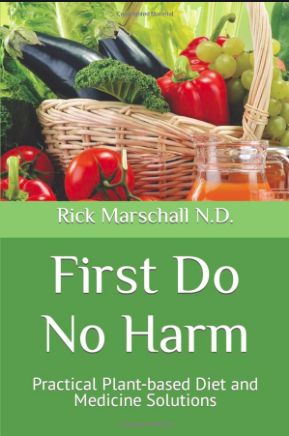 The title of Rick Marschall’s self-published book on Amazon best sums up his philosophy as a naturopathic physician: First Do No Harm. He graduated from Bastyr University in Kenmore, Washington with a license to prescribe anything except opiates. But his focus during his thirty-six years of practice in Clallam County has been on plant-based solutions.

When COVID-19 rolled around, the United States government did not agree with his approach. In the spring of 2020, Marschall says he was having success with a Dynamic Duo product of allicin and larch starch powder for treating this virus. Allicin is an extract of garlic that serves as an antiviral agent and does not harm good bacteria. The starch, called inuloarabinogalactan (IAG), is a powder from the bark of a larch tree that increases the number of white blood cells available to the immune system. His book states, “One reason this treatment works so well for COVID-19, a more sophisticated and bioengineered virus, is that this high potency extract of garlic helps to repair damage to the hemoglobin molecule, and it reduces blood clots in the lungs.”

According to court documents, on March 26, 2020, the Food and Drug Administration’s (FDA) Office of Criminal Investigations (OCI) initiated an investigation after receiving complaints “regarding Facebook postings by Marschall and others” about his Dynamic Duo product for treating COVID-19. On March 30, 2020, an undercover agent for the FDA-OCI texted Marschall that she was “scared about the corona virus so I would like to hear about this product.” The court documents show that the agent and Marshall then had a recorded phone conversation in which Marschall said, “Unfortunately, um because everybody wants this stuff, you know there’s a bit of a wait.”

The following day, he called the undercover agent and “indicated that the Dynamic Duo was now available.” The undercover  agent provided the undercover credit card payment information for the purchase of the product for $140 plus $9.50 for shipping.

On April 2, 2020, by way of the United State Post Office, the product was received in Oakland, California. The undercover agent then mailed the package to the FDA-OCI office in Kirkland, Washington, where they examined the package. The court documents reveal that the package included a document that stated that the Dynamic Duo “can crush 30 different viral infections, including those in the Corona family, (like in China Corona-19), 40 different bacterial infections, 25 different fungal infections and 20 different parasitic infections like amoebas.” The special agent concluded in the court document that Marschall “did knowingly and intentionally introduce, deliver, and cause the introduction and delivery for introduction into interstate commerce, drugs, in violation of Title 21, United States Code, Sections 331(a) and 333(a)(2).

The case was then filed against Marschall in the Federal Western District Court in Tacoma on August 5, 2020. Court documents show he was indicted under 21 U.S.C. 331(a), which prohibits the “introduction or delivery for introduction into interstate commerce of any … drug .. that is adulterated or misbranded.” Marschall said he first received an e-mail from the government and then a letter concerning the case against him.  “They could have just sent me a warning letter,” Marschall said. “For example, with a mushroom company that does the same type of thing that I do, the government told them to stop doing it, or else they would shut them down.”

Court document 299 in this case reveals that United States District Court Judge Benjamin H. Settle made the following statement: “While the Food and Drug Administration has discretion to warn or notify individuals or entities it believes are violating FDA regulations, the government is not required to provide individual notice or an opportunity to cease his (Marschall’s) unlawful activity before charging him.”

After a year of court proceedings, on August 9, 2021, court documents show that the “jury foreperson declared that the jury is unable to reach a verdict. The jury was polled individually, and all members agree. The Court declares a mistrial.”

Another trial was carried out in late October. Court documents show that on October 22, 2021 the jury reached the following verdict: “As to the charge of Introduction of Misbranded Drugs into Interstate Commerce, as charged in Count One, we, the Jury, find the Defendant, Richard Marschall guilty.”

The judge sentenced Marschall to eight months of imprisonment at the Federal Detention Center in Sheridan, Oregon. Judge Settle checked off the following box in his sentencing statement: “The defendant shall surrender for service of sentence at the institution designated by the Bureau of Prisons as notified  by the Probation or Pretrial Services Office.” On May 24, 2022, the judge issued the following: “It is now ordered that the date by which Mr. Marschall must report to FCI Sheridan is extended from May 26, 2022 to no sooner than June 27, 2022.”

Even though this is Marschall’s third conviction in Federal court under the same statute and he had his credential to practice as a naturopathic physician permanently revoked by the state of Washington on October 9, 2018, he remains committed to providing allicin and IAG powder to his COVID-19 patients. For those who are concerned about potential damages from the COVID-19 shot or COVID-19 itself, Marschall suggests consulting with an alternative physician about taking the following, all of which kill the spike protein in the mRNA gene therapy jabs or the virus.