On Dec. 2, Britain’s Medicines and Healthcare Products Regulatory Agency (MHRA) became the first in the world to approve a COVID-19 vaccine developed by Germany’s BioNTech and Pfizer.

A mass vaccination campaign that targeted frontline workers to receive the vaccine began on Dec. 8. Within 24 hours of launching the campaign, MHRA acknowledged two reports of anaphylaxis and one report of a possible allergic reaction.

Reuters reported late yesterday afternoon that an investigation into the anaphylactic reactions by MHRA has identified polyethylene glycol, or PEG, as the likely culprit.

Imperial College London’s Paul Turner, an expert in allergy and immunology who has been advising the MHRA on its revised guidance, told Reuters: “The ingredients like PEG which we think might be responsible for the reactions are not related to things which can cause food allergy. Likewise, people with a known allergy to just one medicine should not be at risk.”

It was also reported that PEG, which helps to stabilize the shot, is not in other types of vaccines.

The statements by Turner that “PEG is not in other types of vaccines” and that people with allergies to “just one medicine should not be at risk” are a failed attempt to provide false assurances and are patently untrue.

Moderna, Pfizer/BioNTech and Arcturus Therapeutics COVID vaccines all utilize a never-before-approved messenger RNA (mRNA) technology, an experimental approach designed to turn the body’s cells into viral protein-making factories. This technology involves the use of lipid nanoparticles (LNPs) that encapsulate the mRNA to protect them from degradation and promote cellular uptake.

The LNP formulations in the three COVID-19 mRNA vaccines are “PEGylated,” meaning that the vaccine nanoparticles are coated with a synthetic, non-degradable and increasingly controversialPEG. 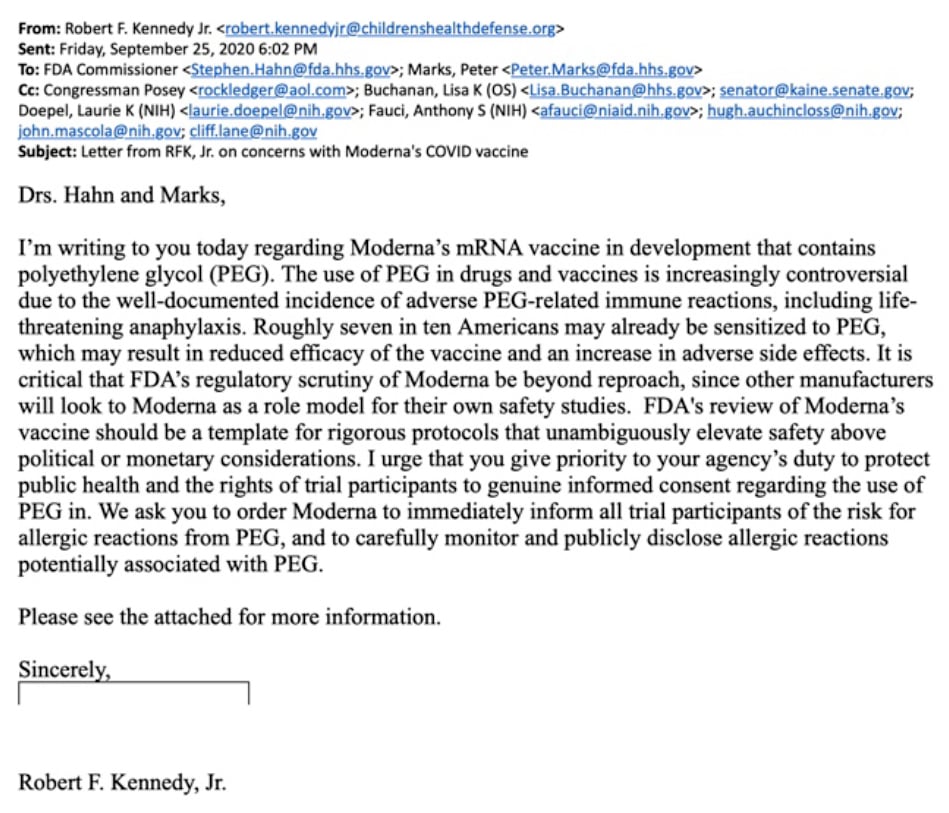 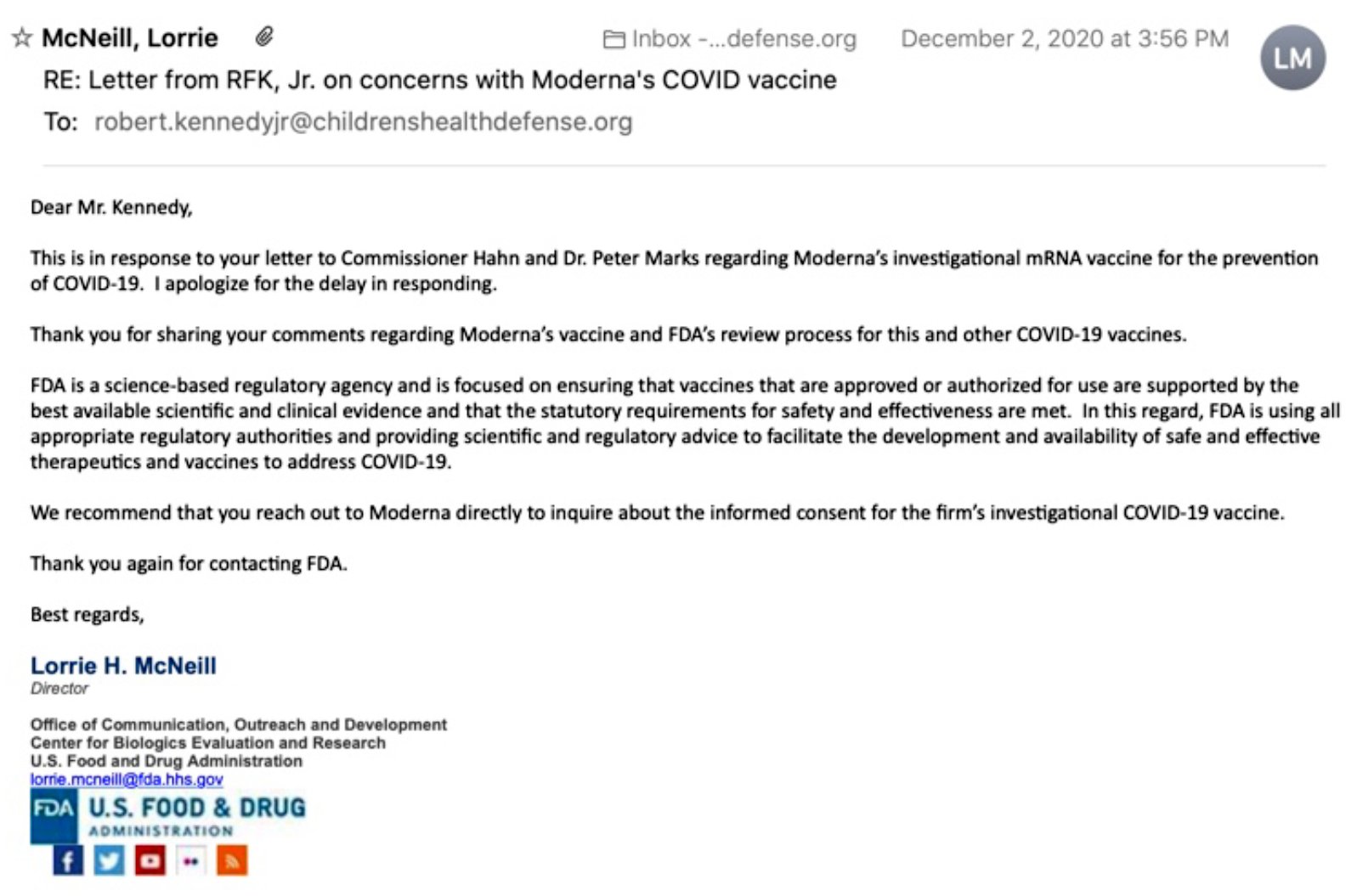 In earlier communications with Moderna scientists regarding the controversial use of PEG in the company’s COVID-19 vaccine due to the potential for life-threatening anaphylaxis and need for pre-screening for PEG antibodies prior to vaccine administration, they insisted that the existence of PEG antibodies was purely hypothetical and underserving of concern:

“Pre-screening populations based on hypothesized biomarkers, such as anti-PEG antibodies, is not a strategy currently employed in our clinical trials.”

Given the recent evidence of PEG anaphylaxis in Pfizer mRNA vaccine recipients, I wonder if FDA and vaccine manufacturers will now reconsider their position.

An extensive review of PEG therapeutics, published in 2013, documented adverse effects of PEGylation and questioned the wisdom behind the continued use of PEG in drug development. The authors concluded that “the accumulating evidence documenting the detrimental effects of PEG on drug delivery make it imperative that scientists in this field break their dependence on PEGylation.”

The statement by Turner that “people with a known allergy to just one medicine should not be at risk,” is also not true.

A 2018 study, “Immediate Hypersensitivity to Polyethylene Glycols and Polysorbates: More Common Than We Have Recognized” reports there are more than 1,000 products, including prescription drugs, that contain PEG. (See chart below for detailed descriptions of PEG containing drugs.)

The decision to allow people with other medication allergies to receive vaccines that utilize PEG in the manufacturing or delivery of the vaccine is a very risky proposition — especially given that Pfizer has said people with a history of severe adverse allergic reactions to vaccines or the candidate’s ingredients were excluded from their late stage trials.

We have no idea what the incidence of allergy or anaphylactic reactions will be once Pfizer begins global distribution of the vaccine, without such exclusions.

A 2016 study reported detectable and sometimes high levels of anti-PEG antibodies in approximately 72% of contemporary human samples and about 56% of historical specimens from the 1970s through the 1990s. The population’s increased exposure to PEG-containing products since the 1990’s makes it natural to assume that anti-PEG antibodies will continue to be widespread.

As approval of PEGylated mRNA vaccines for COVID-19 occurs, the uptick in exposure to injected PEG products will be unprecedented and potentially disastrous.

While four out of five doctors regularly prescribe PEGylated drugs, only one out of five are aware of the potential for anti-PEG antibody responses. And only a third even know that PEG is in the drugs that they are prescribing.

A Vanderbilt University researcher agrees that there is a widespread lack of recognition that PEG hypersensitivity is possible, much less that it manifests on a regular basis. While it has been recommended to screen patients for anti-PEG antibody levels “prior to administration of therapeutics containing PEG” such testing is currently only available in research settings.

In a declaration effective Feb. 4, the Secretary of Health and Human Services invoked the Public Readiness and Emergency Preparedness Act (PREP Act) and declared Coronavirus Disease 2019 (COVID-19) to be a public health emergency warranting liability protections for covered countermeasures, including vaccines.

The fact that the FDA has abdicated its responsibility for assuring the safety of COVID vaccines to vaccine  manufacturers means we are on our own to study the science, and weigh the benefits and risks of all drugs and vaccines.

CHD will continue to monitor this important safety issue in an effort to keep you well informed on the science and public policies surrounding COVID-19 vaccine development.

The views and opinions expressed in this article are those of the authors and do not necessarily reflect the views of Children’s Health Defense.

Lyn Redwood, R.N., M.S.N., is a Nurse Practitioner who became involved in autism research and advocacy when her son was…

Sign up for free news and updates from Robert F. Kennedy, Jr. and the Children’s Health Defense. CHD is implementing many strategies, including legal, in an effort to defend the health of our children and obtain justice for those already injured. Your support is essential to CHD’s successful mission.